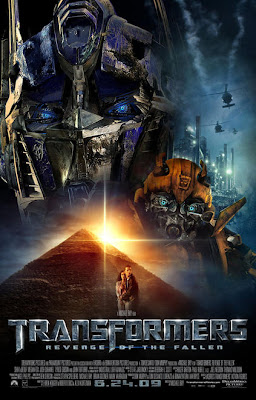 It’s been two years since Megatron’s body was dropped to the depths of the ocean. Since then a private team of humans called Nest have been working with the Autobots to eliminate the remaining Decepticons. Just when they think their job is nearly done, one Decepticon reveals a terrifying prophecy— “the Fallen shall rise again.”

The Fallen is one of the ancient Prime brothers, descendents of Optimus Prime. But unlike the others, the Fallen hated humans. He planned to destroy the Earth’s sun, giving him access to a powerful energy source and annihilating the human race in the process. In order to destroy the sun, he needed a massive device buried somewhere in Egypt. But his brothers were loyal to the human race and wouldn’t let him destroy the world. Instead, they sacrificed their lives to protect the key—the only object that would engage the device.

Sam (Shia Labeouf) is heading off to college 3000 miles away from his girlfriend MacKayla (Megan Fox), his overprotective and emotional mother, and his anxious father. While packing, he finds a sliver of the energy cube (which was destroyed in the previous film) attached to his sweatshirt. When he touches it, the silver sends signals into his mind, causing him to see symbols which he later discovers are the lost language of the Primes. These symbols lead him, his girlfriend, his cowardly roommate, and a robot expert to Egypt in search of the key that will engage the sun-destroying device.

The Decepticons set out in search of Sam, planning to probe his mind for the symbols and then destroy him. The Autobots come to his rescue, but Optimus Prime, the last member of the Prime family, pays the ultimate sacrifice. With Optimus Prime gone, the fallen can rise again and set forth his plan to destroy the planet. Now both Sam and the Fallen seek the key; not only does it have the power to engage the sun-blasting device, but it can also resurrect Optimus Prime.


Well, I know I am late hahaha. However, I got a reason : last time when this film was very booming, I was not in Indonesia. I was here, taking care of my college stuffs. Then when I came back, all (really really all, I also confused) my school & course friends, my cousins, my sis my bro, they all have watched it. As the result, there were no people I could ask to watch with. T_T

Today is supposed to be my day off, but Ms. Tana, my FOB lecturer, wants replacement class for this morning. Today is the first Thursday I woke up at 7 AM. lol. The class finished at 10.30 AM and I do not have anything to do, so here I am.. watching all the movies. Thanks to Agus for giving me other distractions. lol.
Posted by Leni at Thursday, October 15, 2009
Email ThisBlogThis!Share to TwitterShare to FacebookShare to Pinterest
Labels: movie