Some updates, I have done most of the things in My List!

1. Good Bye IB Individual Assignment
Yups, I have done it, it was one of the hardest assignments T___T and it's my first time using so many books to do it... 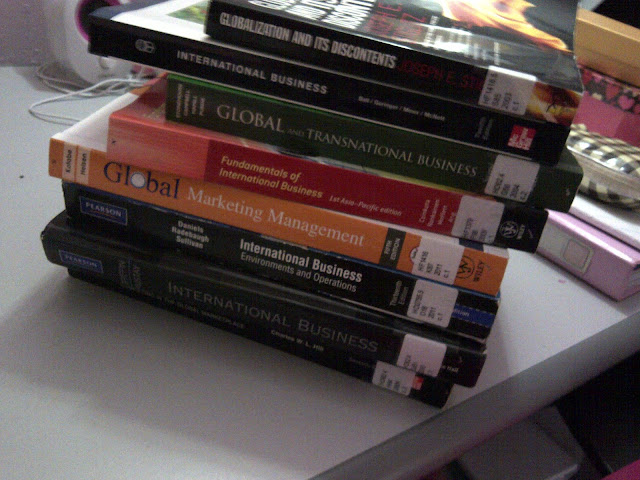 I don't know how it will turn out T_T only God's favor can save it huhu. Anyway since I have finished it, I don't wanna think about it anymoreeee.. so byebye.

2. FRESH FIESTA!!
It was on last Sunday and it turns out to be so greattt ^^ so happy that all of the Fresh Coordinators enjoyed it so much.. hehe..

Me and Frank actually prepared 5 games, but we can only play 3 that night because of time constraints. We enjoyed it too much and did not realise that we used up so much time playing haha.

I was the host that night so I did not join the game but I laughed sooooooo hard!! It was super funny that night!!!! Too funny hahahahaha

First we played this "Introduction". 2 people in a team, A&B. Each one will get a set of questions and both are different questions. A must ask those questions to B and later A must introduce B based on all B's answers, and vice versa.

Some of the answers are so funny and I can't stop laughing hahaha.
Those questions include questions asking what's their funniest moment in life, food that tastes so bad, animals that scare them, songs that describe their life and they must sing it, and many others..

It was so funny haha and so great that we now know each other better. It was the intention, because we are a team, we should get to know each other first and it will actually make it easier to work together.

Pictures when they are in the process of getting to know each other :p 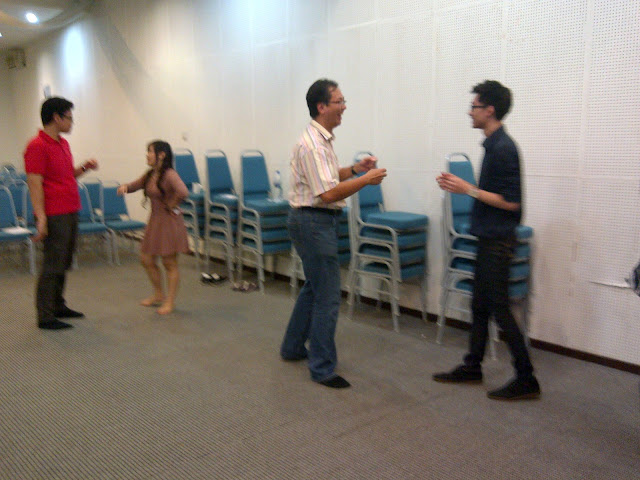 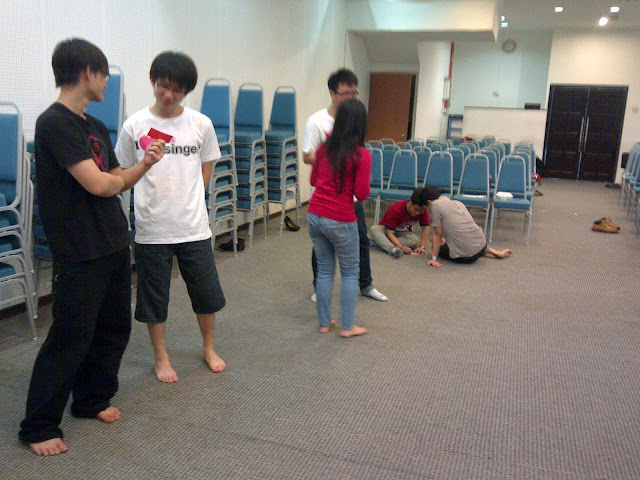 This introduction itself took more than 30 minutes lolll.

Next we played this game called "Draw Something" hahahaha, no no, it was not like the game in apple, we just used the name for fun. The game was adapted from Running Man. We divided them into two groups, the first person will be given a word and he/she must draw based on that word, then the next person will look at the drawing and draw the same thing, and the last person will need to guess what the drawing is..

This was super funny too!!! As they were only given 5 seconds to draw, and then all the drawings evolved to we also don't know what hahahahaha. Sometimes the first person drew it wrong too, and totally cannot guess it hahaha. 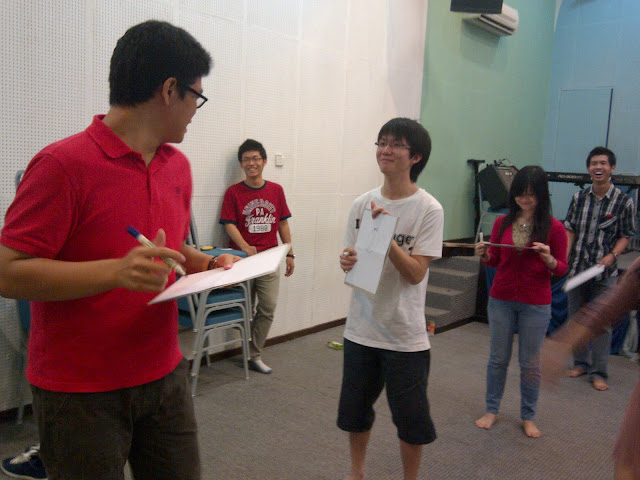 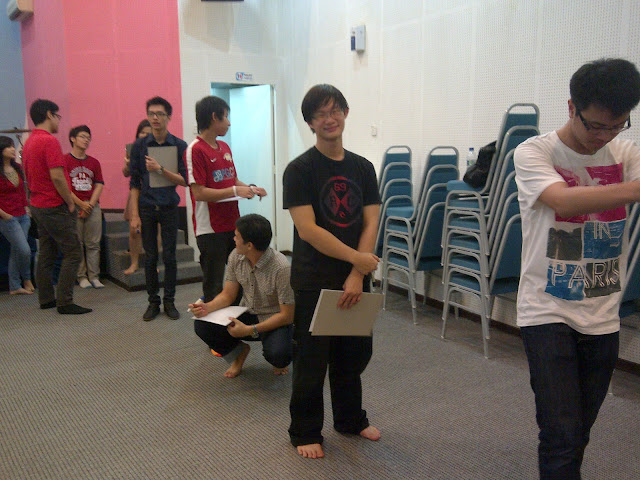 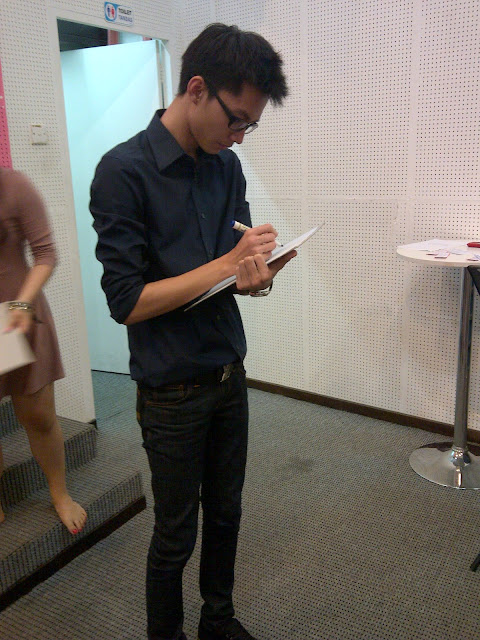 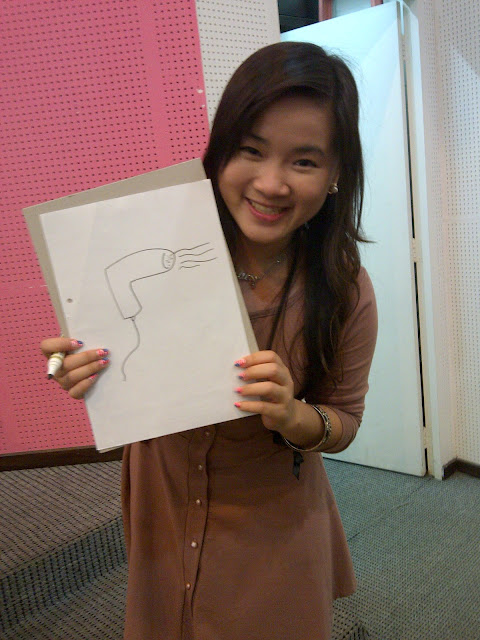 Venna was drawing hair dryer and she drew correctly! Eventually the drawing changed to don't know what LOLLL.

Some of the drawings evolution hahaha. Taking these pictures make me laugh so hard hahahaha


There are some others funny too but I did not bring back all the pictures lol, I laughed so hard man even looking at this. Yea I am bad I know. I didn't join the game so actually we do not know whether I can draw well or not lol. But I laugh at people lolll, well, I laugh at pictures not the people hahaha.

Anyway, we really had great time with these drawings, but then we couldn't even get a winner loll, no one can guess any correct hahaha. So we move on to the third game.

It is called "Sing it right, pleaseee...."
The group is mixed again, so they are with different people from previous game. This time, they will listen to a song, and after that they need to sing the song correctly. Each person sing a part, then next person continues it. The best part is when you sing it wrong, the rest of the members will get punished, you are safe loll. The songs are sunday school songs, hahaha, and most of them never listened to the songs. It was so funny too hahaha, and hard I guess hahaha.


Hahahahaha as a host I enjoyed it so much, it's like watching running man live LOL. Only that this is not running man people but same funny hahaha.

We did not have enough time to continue to other games, so we decided to close it because the next day Andre and Tere have exam, some of us have assignments due to, so we stop there. But well, we had really great time and fun :D:D

To be honest, I was a bit scared that they will not enjoy this or find it boring, but turns out not bad looo, in the end we all are happy with Fresh Fiesta, and the most important thing, we become closer as a team :D:D

3. I have not bought my ink yettt, but I have bought my new itouch screen protector, and it looks much better now :D Traecy said my itouch was ugly coz it was dirty and the screen protector like ugly already.. lol, now it's like new!! :p
Posted by Leni at Tuesday, May 22, 2012
Email ThisBlogThis!Share to TwitterShare to FacebookShare to Pinterest
Labels: Fresh Ministry