Last Friday, 18th May 2012 was the birthday of Ce Monce aka ce Monch aka Monica. She was the founder of SW14 lol, and she has already back for good to Bandung.. but last Sunday was the day of her convocation so she came to Malaysia just nice, the day of her birthday.

Therefore me and SW14 girls prepared her a birthday surprise ^.^
That night itself me and SW14 had komsel, and ce Monce went for dinner with ko Niko. After komsel, we went back to my room and waited for ce Monce to come back home.

When ce Monce reached home (same house with me), the girls prepared in my room, I opened the door for ce Monce and had a chit chat with her while waiting for the girls to come out with the cake..

And tadaaahhh.. We successfully surprised her! :D 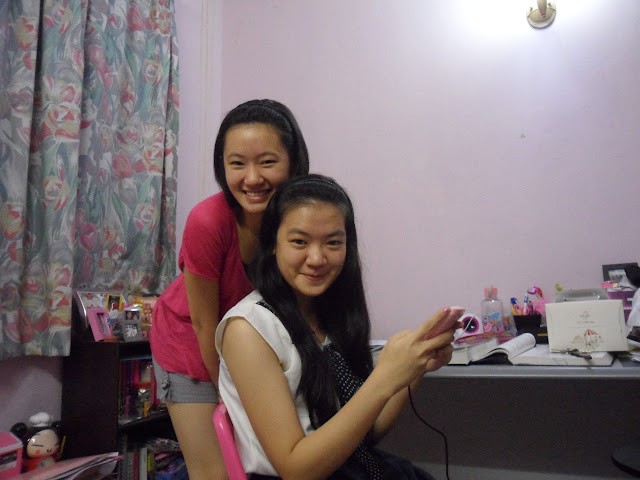 A picture of me and Ratna while waiting for ce Monce to come home :D yup that is my messy room hahaha... 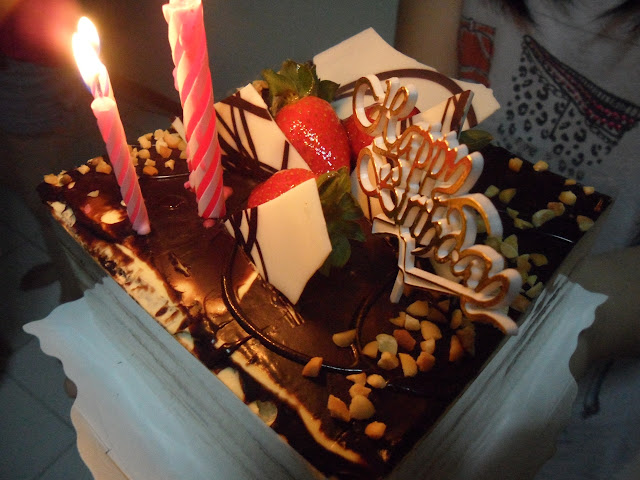 The cake! Nice right?? From RT Pastry House in Subang Jay ^.^ it is now officially our favourite pastry shop! 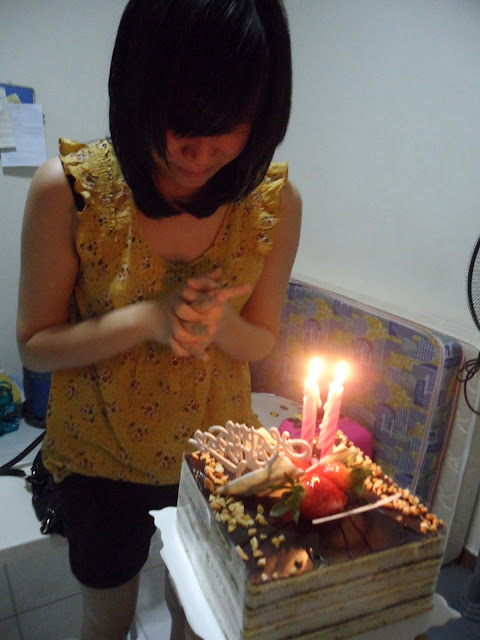 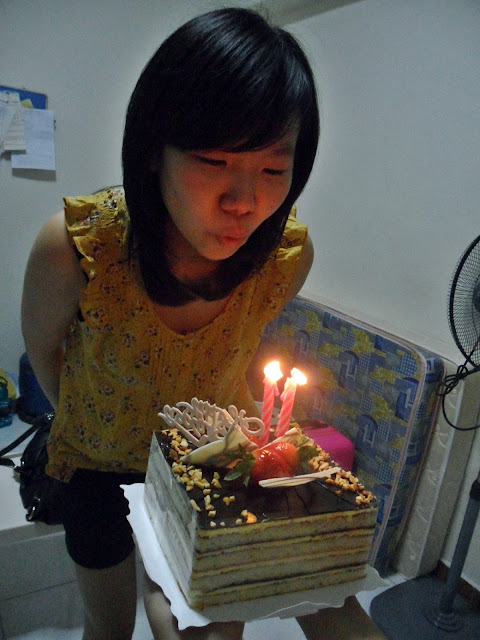 That is ce Monce making a wish and the blowing the candle! :D Happy 22nd!! 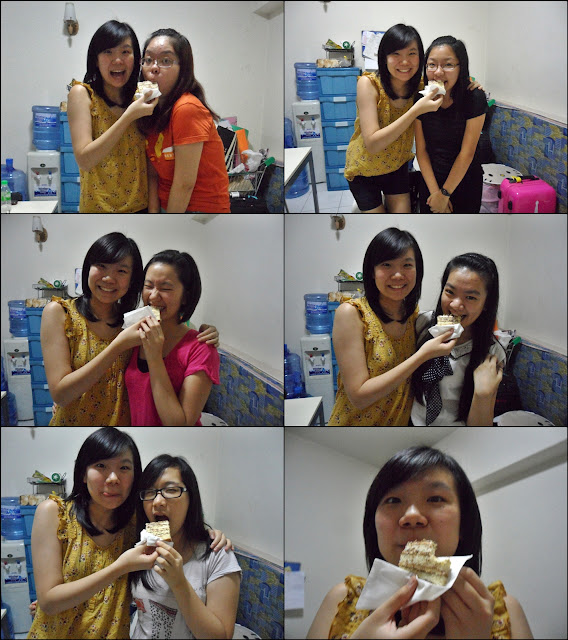 Then we wanna take pictures.. of 6 of us, coz no one want to lose and be the photographer lol, all also wanna be in the picture lol, sooo... we use my camera and the tripod.. 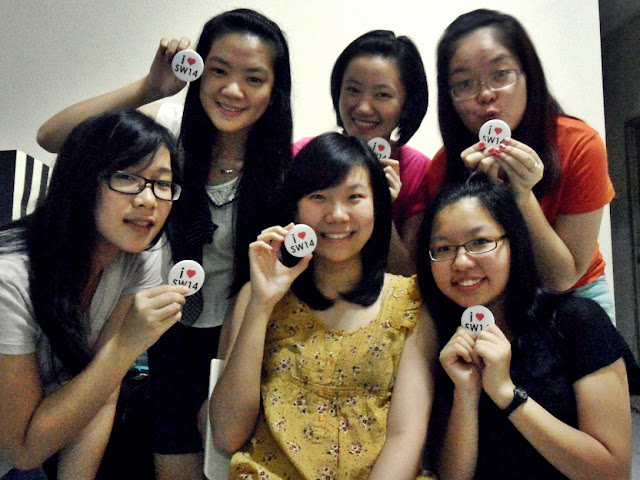 Apparently my camera is not so good when it's low light :( and oh! Ce Monce gave us i♥sw14 pin hehehe. Cute right! :D 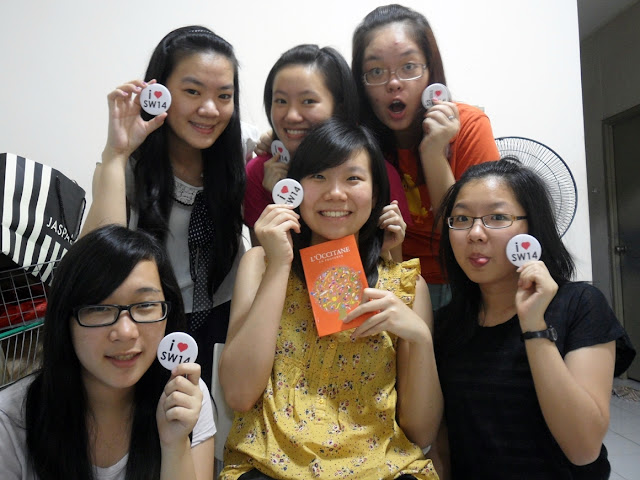 This 2nd pic turns out not bad! I think put different settings already haha i forgot :p
We took lotsa pictures but a lot blur LOL. Coz we were using this smile detection thingy.. So it will snap a picture itself when someone smiles, so it snapped a lot of pictures too fast! We all haven't ready yet but coz of somebody's smiling then it snapped haha, so a lot blurrrr... 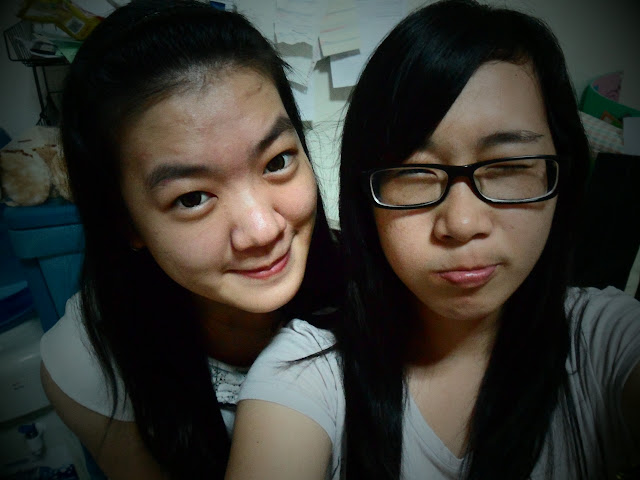 Then I changed the setting using vignetting.. hahahaha, me and Nia! 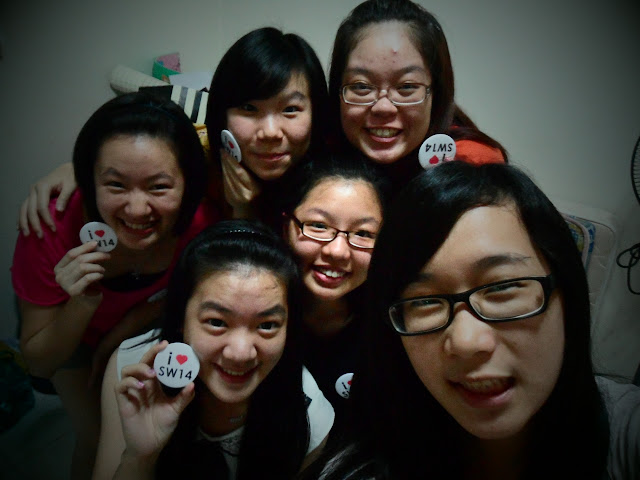 Then we took picture again! This time round we did not use the tripod anymore, we used Nia's hand + the power of Samsung front camera hohohoho.. Cool right! Camho with 6 people inside! Well, last time even cooler 9 people hahahaha. Girls. :p 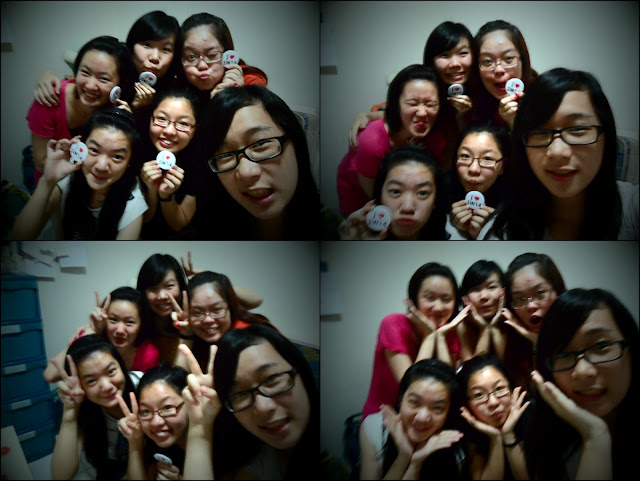 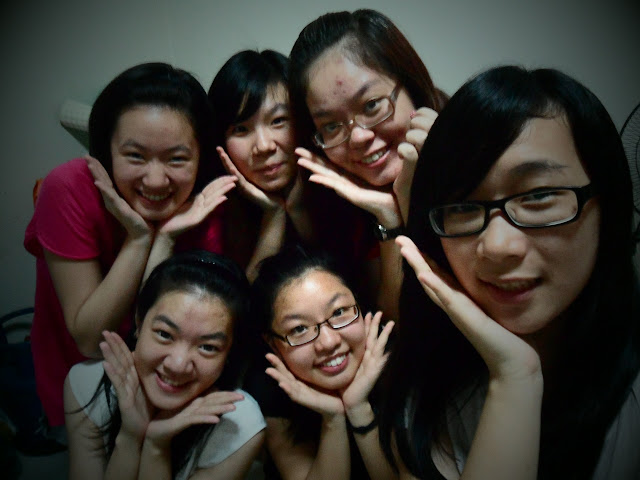 Not blurred Cherrybelle style! I look so suffering there? hahaha 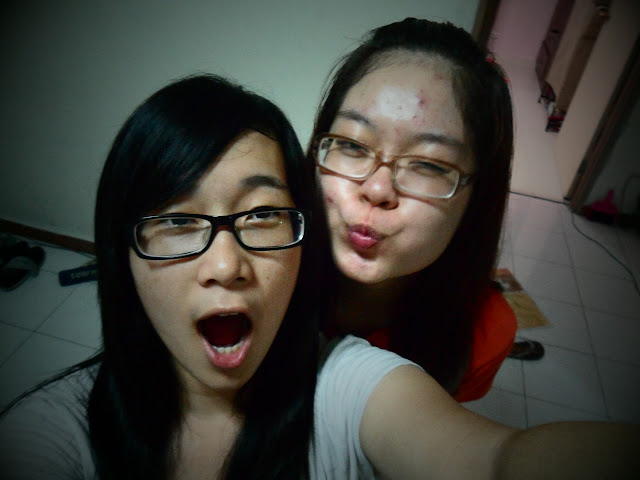 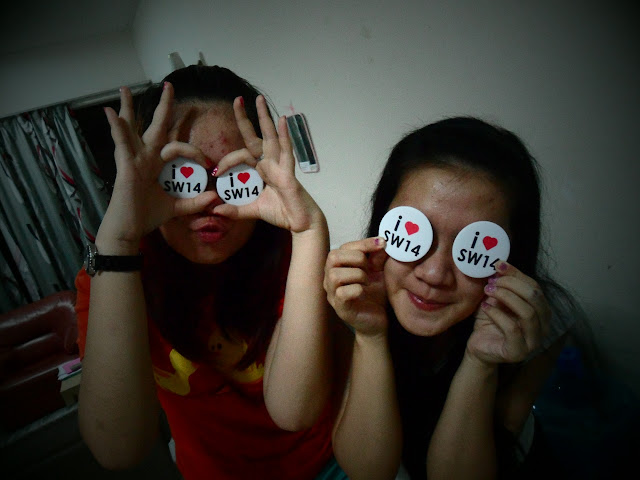 Thennnn we started to play around hahahaha... 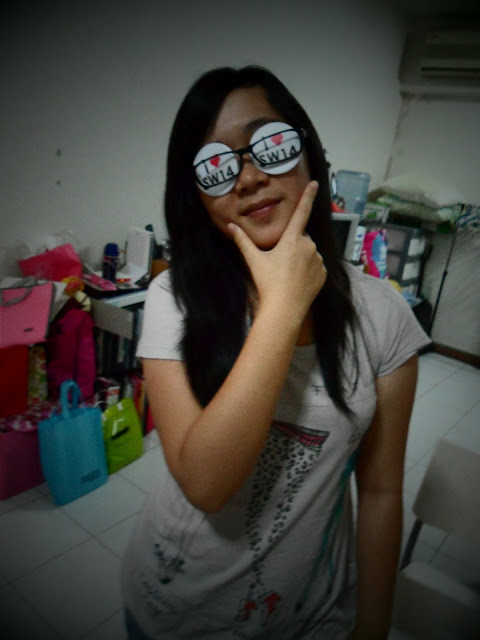 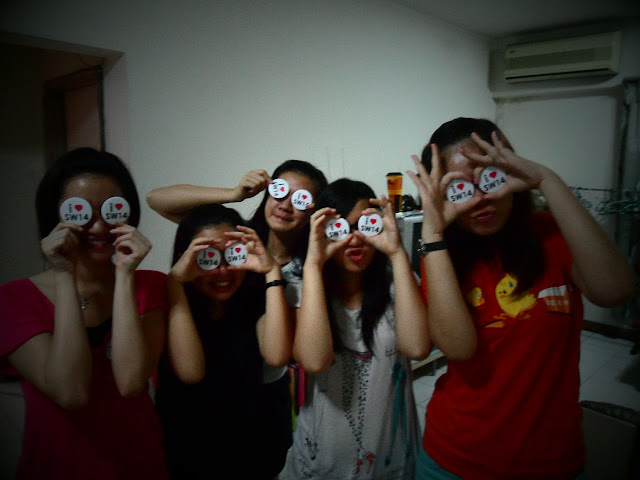 LOL. This time around ce Monce must sacrifice not to be in the picture lol, coz everyone is covering their eyes, cannot help take! :p 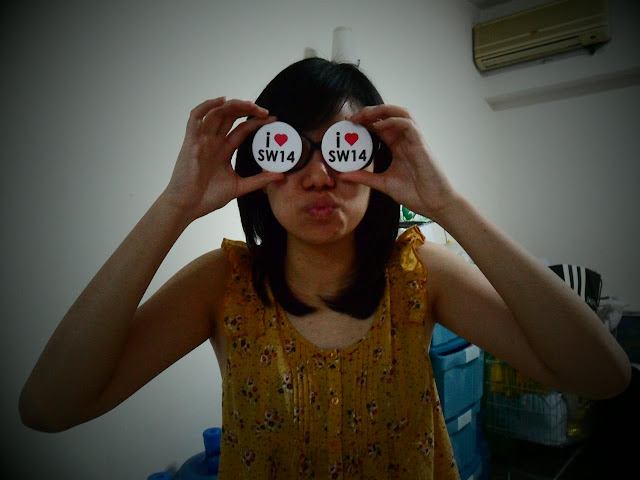 Ok lo help her take a pic of herself.. hahahaha 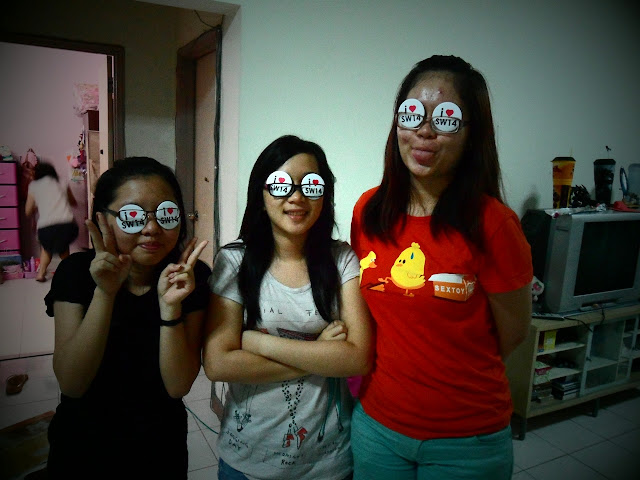 lol this one is funny! :p got me there at the back with my pinky room hahaha.. I was busy looking for props to take more pictures LOL 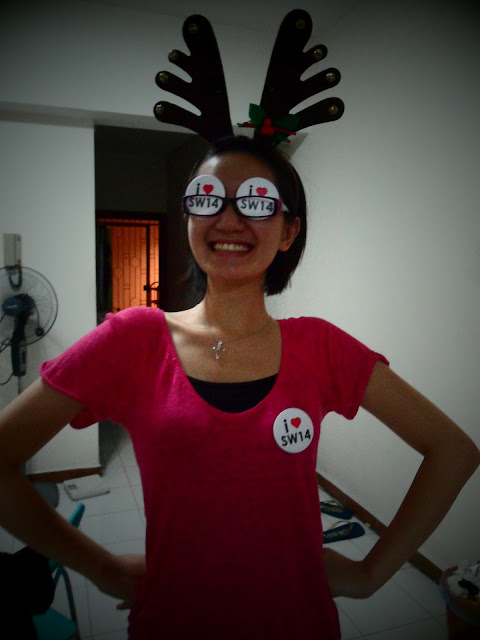 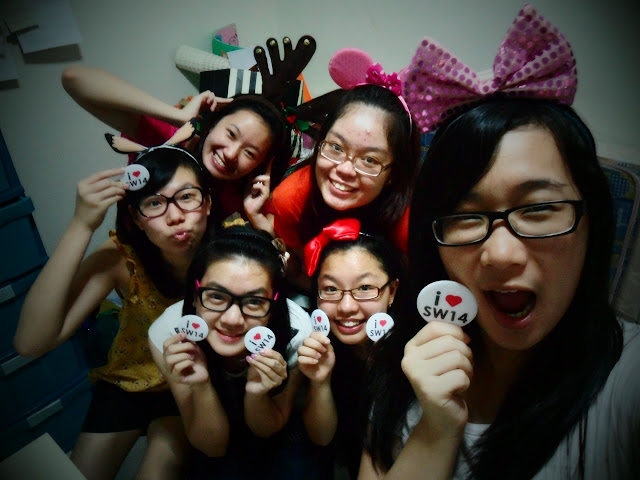 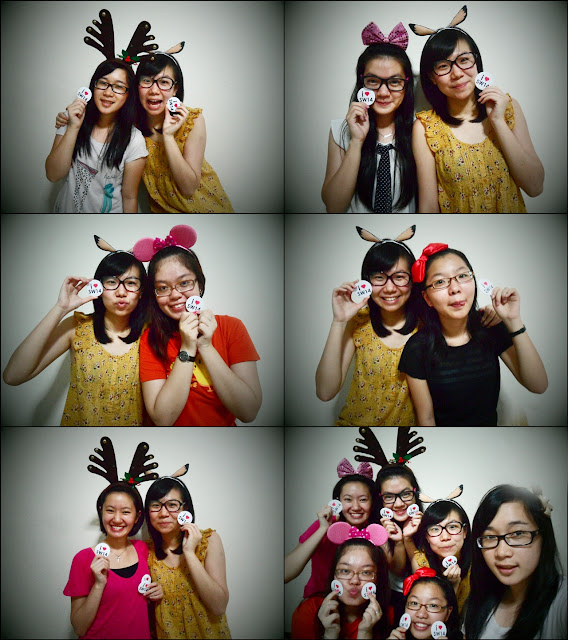 Combined all. Easier to edit. lol. But i like this pic very much =DD 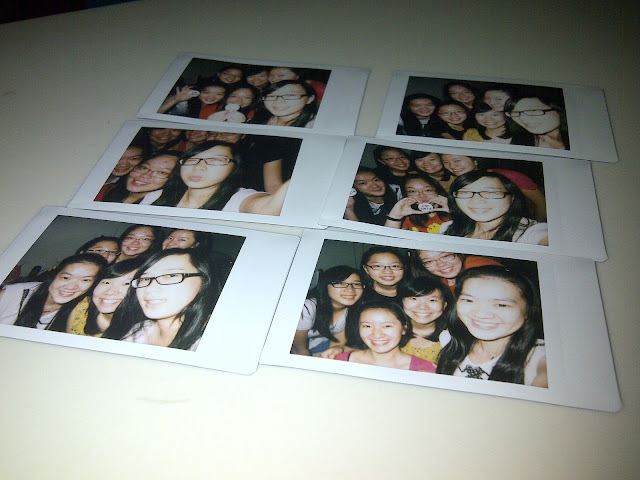 We took polaroid pictures too! And since everyone wanna be in and no photographer available (it was midnight already lol), so we took ourselves! hahahahaha.. we are so pro man.. or Nia is so pro! Hahaha 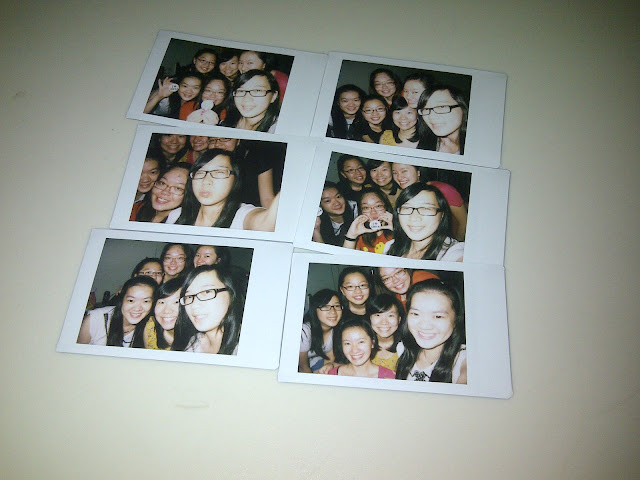 You seee!! We are in most of the pictures hahhaa.. only the middle left coz that one we used 7s and it was different with 25s hahaha, but there rest not bad what! Hahaha 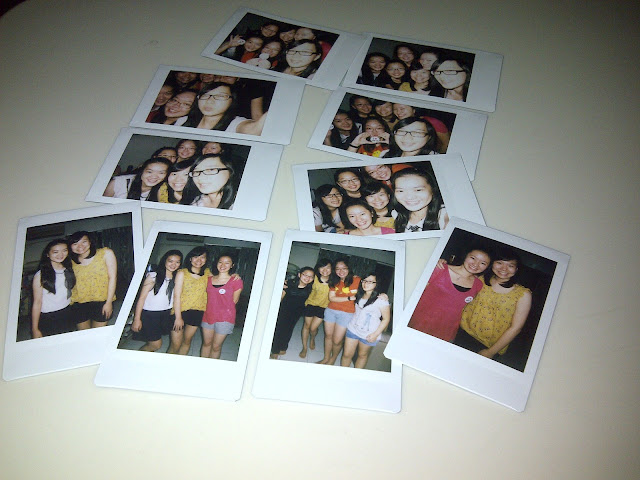 The polaroid pictures we took that night ^.^

Alright! End of the post.
Happy birthday ce Monch =)
Hope all of your dreams come true! Thank you for being the best mentor ever ♥
Love you so much :)
God bless.. ♥

Posted by Leni at Thursday, May 24, 2012
Email ThisBlogThis!Share to TwitterShare to FacebookShare to Pinterest
Labels: Birthday, sw14