Nope, I did not cut my hair. hahaha.
My hair is still long. Yesh, wanted to cut it but not that short.

Yesterday, after discussing assignment with Trace, I went to read Cheesie's blog and found this short hair cheat one. Me and Trace were so amazed as it looks so natural LOL. So I went to try it hahahaha. And yes, that first pic of me was using that trick! Successful right? Looks so natural :p

Then we have this idea of try posting it on my twitter and BBM and see how people response to my short hair lol. All along, I have always had long hair and it would be a shock if I suddenly cut short.

And so I posted this picture: 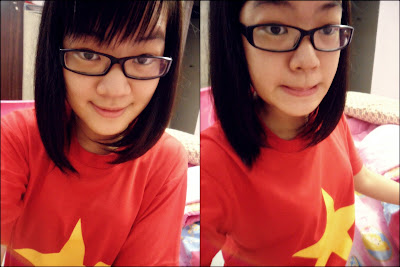 As expected, people started asking me whether I cut my hair hahaha. Almost all of them believed I cut my hair, even Frank also believed I did cut my hair, and he even said it's nice some more. LOL LOL. Till I told him that I did not cut, he said he was happy that I finally want to try a new style and it turns out nice lolol.

A lot of people commented that my short hair is nicer. Some see I cut my hair d, they let out their thought of my long hair saying that actually all along my long hair is not nice, messy T____T they thought I already cut so they can say la, but the truth is I did not cut my hair. Mwahaha. Even my mom, she said short is much better, long not nice -__-.

But some still support me though! Some said they like me with long hair more :D hahaha. In conclusion, we can't please anyone :p but I don't dare to cut my hair that short yet.. huhu. Still love my long hair. Wanna cut la, but not that short.

Anyhow, I enjoy having short hair even though it is cheat lol. Looks not bad also :p 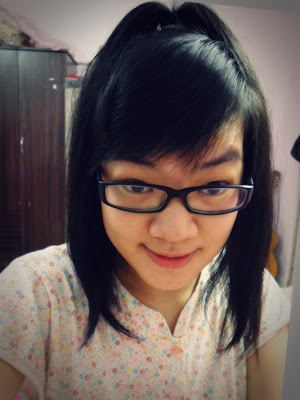 I just tied my hair up there, let my hair falls to the left and right side, and did not capture the tied part :D and tadah! looks like short hair.

My hair is still this long la

It is really quite messy so no wonder my friends said the short one is nicer coz it's neat hahaha. Talking about people comment right.. my friend is so funny haha, he left the comment saying that if I have any problem I could find him to share LOLLL. He thinks I am too stressed and no one to share so I cut my hair? lol.

I feel a bit bad trolling people, but I did not lie thoughhhhhhhhhh :p. I did not say I cut my hair. Whenever people asked, I replied back with "is it nice?" :p not answering their question lol. be a denial hahahha. That's why don't assume :p haha ya la ya la, my fault misleading people. Therefore I made another tweet to apology hahaha.

Anyway, I enjoy the fake short hair! Thanks to Cheesie for tutoring this lol. And sorry people disappoint you :D

Another anyway, maybe you girls should try it. Fun lo :D