Miracle in Cell No.7

It's been a while :p

I know :( I have been way too busy with my job and all and not that I want to abandon you, my lovely blog :( nooooooooooo :(.. it's just that... I don't know what to blog about! hahaha, excuses.

So, good thing I am updating today! Yay! But I have lost my writing skills T_T
Need to update often again!!

I have been wanting to write about this though.. 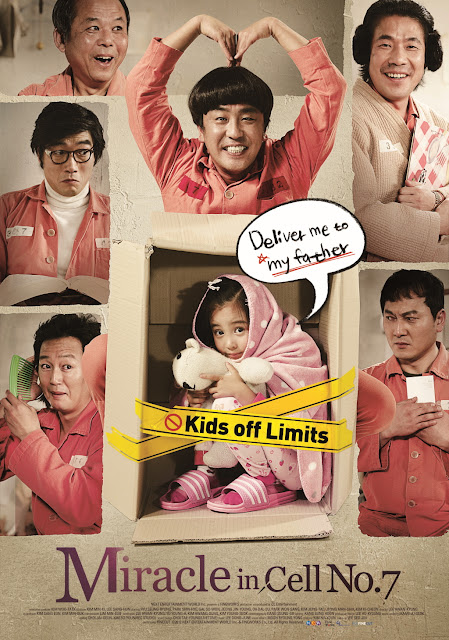 Don't get cheated! The movie poster might look cute and funny and all, but the movie is veryyyyyyyyyyyy touching, if not sad..


Lee Yong-gu is a mentally challenged man with an intelligence of a 6-year-old, which is actually the age of his own daughter Ye-sung who is much smarter than her peers. The two of them lead a happy life on their own while Yong-gu makes a living by working as a parking attendant at a local supermarket. But one day, when the police commissioner’s young daughter dies in a strange accident, Yong-gu who happens to find her is falsely accused and sentenced to death for abduction, sexual assault, and murder of a minor. Ye-sung is sent to a childcare institution and Yong-gu gets imprisoned and assigned to Cell No.7, the harshest cell in a maximum security prison.
At first, other inmates in the cell keep their guard against Yong-gu, then realize that there's something wrong with him. Not understanding his own dire situation, Yong-gu only worries about his daughter. One day, he saves his fellow cellmate, an influential figure in the prison, from an attack by his rival. In return for saving his life, Yong-gu is granted a wish: to see his daughter Ye-sung again. The inmates put their heads together to carry out a daring operation and miraculously succeed in sneaking Yesung into Cell No.7 during a religious event. While the father and daughter rejoice, the others realize it was relatively easy getting her in, but impossible getting her out. After a while, Yesung is detected and sent back, but during the time the inmates as well as the prison guards come to realize that Yong-gu was falsely charged. And they all put their heads together to prepare him for his final trial.


I copied that from Wikipedia lol.

Why do I want to write about this is..
Somehow this movie reminds me of how a dad's love towards his children will let him do anything, even die, for his children. 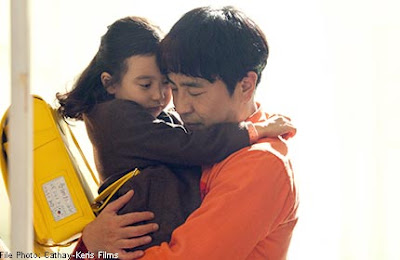 Having loved his daughter so much.. Yong-gu can't resist the thought that his daughter will be killed... and he took his sentence ALTHOUGH he actually did not do it..

This somehow.. reminds me.. of what Jesus has done two thousand years ago.. He died at the cross for us His children.. and He did not even do anything wrong.... but merely because He loves us so much, He's willing to do that.. I am soooo grateful to have a Dad like Him..

To be honest, I don't like the movie, it's way too unfair. Someone who must be responsible to what he had not done =(

On the other hand, it's a very nice movie though.. On the bright side, with this happened, he sacrifices his life but a lot of other lives were saved, including his own daughter and his cellmates.. and again, it reminds me of Jesus' sacrifice.. and how I shouldn't waste on it!

T_T anyway thinking of this movie again makes me so sad.
lol.

Posted by Leni at Saturday, July 27, 2013
Email ThisBlogThis!Share to TwitterShare to FacebookShare to Pinterest
Labels: movie